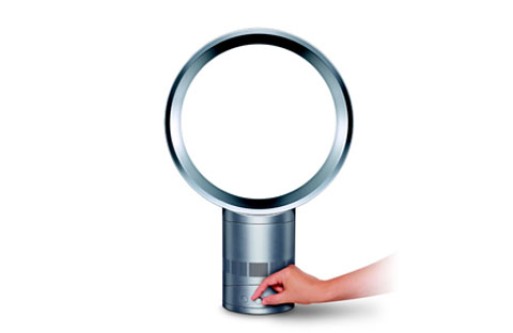 Yep, James Dyson is at it again. Leave it up to him to improve upon a fan by making it completely bladeless. That’s right, no blades. It instead amplifies and accelerates air (see below) so that it expels 118 gallons of smooth air every second. Very clever.

Air is drawn into the base of the machine. The air is forced up into the loop amplifier and accelerated through the annular aperture, creating a jet of air that hugs the airfoil-shaped ramp. While exiting the loop amplifier, the jet pulls air from behind the fan into the airflow. At the same time, the surrounding air from the front and sides of the machine are forced into the air stream, amplifying it 15 times. The result is a constant uninterrupted flow of cooling air. The Dyson Air Multiplier fan is powered by an energy efficient brushless motor and air speed can be precisely adjusted with a dimmer switch. No blades mean no need for a grill and it’s safe and simple to clean.