Written by Katie on February 2, 2011. Permalink 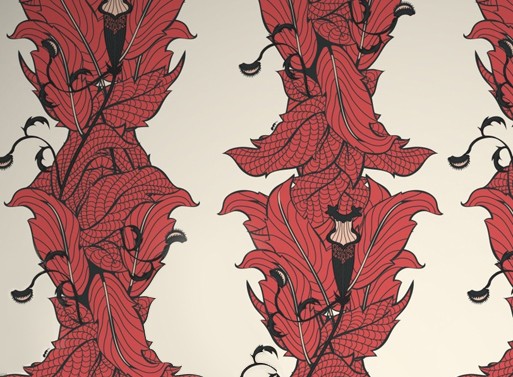 This luscious botanical wallpaper would sure spice up a small (or large?) room. The teaberry (shown above) is my favorite, but for $2 a sample you might want to try out the Heron and Pineland colorways as well. Also, the Ms. Ward design (shown below) is also worth a look, as there’s delightfully large storybook insects involved.

“Mary Treat (1830-1923) was an American-born naturalist devoted to the understanding of carnivorous plants. Throughout her many years of autodidactic study, Treat made extensive contributions to the botanical world, published several books and was an outspoken correspondent to Charles Darwin. Treat and Darwinâ€™s recorded discourse extends over five years, and most notably involves the inner workings of the Utricularia plant’s trap. Darwin believed insects wedged their heads into the traps, thus becoming stuck and then consumed. Treat’s extensive research, fueled by her curiosity and vigor for experimentation, revealed that the Utricularia plant actually snapped shut when small hairs around the entrance of the trap were triggered. Treat so influenced Darwin’s understanding on the subject that he references her several times in his Insectivorous Plants (1875). Though much of Treat’s work has been forgotten, four species of plants and animals bear her name, including the ant species Aphaenogaster treatiae. Look hard enough, and you might spy one of the little critters within her leafy carnivorous menagerie.”