< Back to all RENOVATE 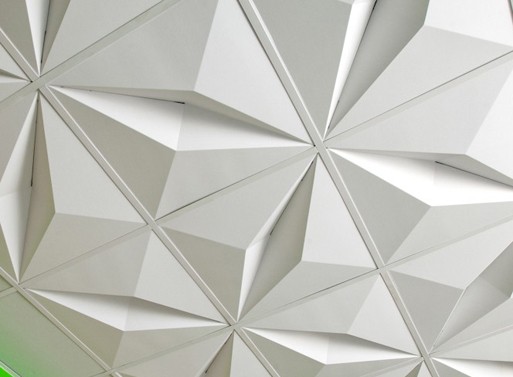 Drop ceilings are rarely something to be admired, however MIO is changing that with FoldScape, a three-dimensional ceiling tile that ships flat and is folded at the installation site. Talk about an easy way to make a blah-ish ceiling interesting, huh? Available in 24 tile packs, the tiles are lightweight and measure a standard 2’x2′ size.

END_OF_DOCUMENT_TOKEN_TO_BE_REPLACED 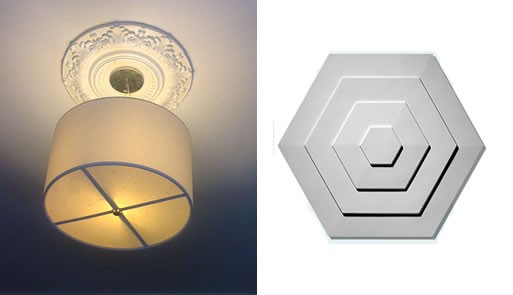 I’m a big fan of the juxtaposition between old and new, and as such I’ve been considering a ceiling medallion for my home. I was thinking I could go with an old medallion with a new lighting fixture as seen on the left, or go with an entirely modern medallion, as seen on the right.

What I really like about the photo on the left is that the light fixture is exactly the same size as the medallion so they really create a nice effect. This photo was taken from a house I used to live in–the medallion came with the house, and the lighting fixture was about $20 from Target (no longer available). You can find a nice selection of medallions online, such as at Lamps Plus or CeilingMedallions.com.

The modern medallion is available here for $69.

I think I remember originally seeing this subject in Domino (so sad to see it fold), and just recently remembered the idea when staring up at my oh-so-not-spectacular living room ceiling. It seems like a great way to add some character and interest to a room without going full out crazy on construction costs.

They’ve got a good variety of instructions to help you through installation, which, of course, I’d recommend taking a look at before you buy.

Price varies according to size and wood type. Buy it here.