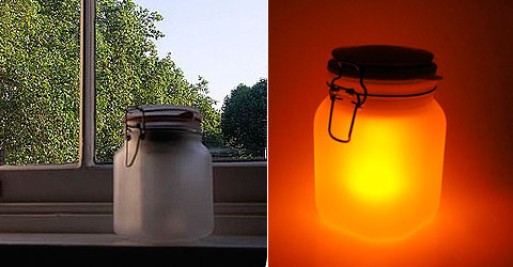 I’ve been following the work of Tobias Wong for sometime now. His ever present sense of humor makes for some interesting design ideas…his collaboration with Ju$t Another Rich Kid brought us 24k gold plated Bic pen caps, and McDonalds coffee stirrers “for the man who has absolutely everything.”

I recently discovered the Sun Jar, which isn’t available just yet, but may be something you’ll want to pre-order. At a mere $38, this old-fashioned glass jar contains a solar panel LED light system that will store the days sunlight and illuminate your space at night. It reminds me of catching fireflys as a child. We would poke holes in mason jars and have a little lantern powered by mother nature, that is, of course, until my mother would make me release them.