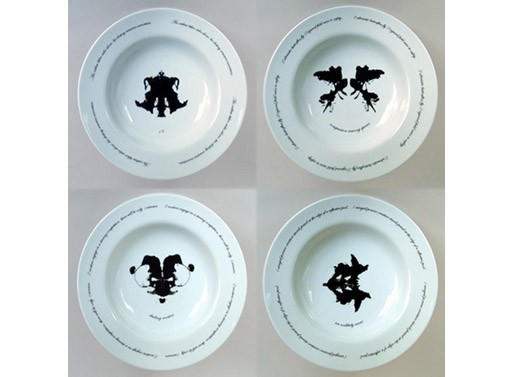 I think these might be one of my favorite things I’ve seen in a while…and I’m going to quote straight from unica as they did such a good job explaining the series and such:

“the ink blot series, designed by kathleen walsh for walteria living, is inspired by a 19th century parlor game called blotto. a pre-cursor to the use of inkblots by rorschach in modern research psychology as personality tests, blotto encouraged right-brain thinking in a social setting. it is the intent of this series to simulate a similar dialogue and promote togetherness around the dinner table. plates are japanese porcelain with lead-free certified glaze. sold as a set of 4. available with text in black or gold. dimensions: 10.7″d

text on the plates reads as follows:
a) “1% – an outlaw biker rides alone, his destiny remains uncertain”
b) “compassion among species – 2 altruistic butterflies fly 2 injured field mice to safety”
c) “dueling roosters – 2 roosters engage in staring competition, there will be only 1 winner”
d) “an unlikely event – 1 winged porcine creature stands poised at the edge of a reflective pool”‘