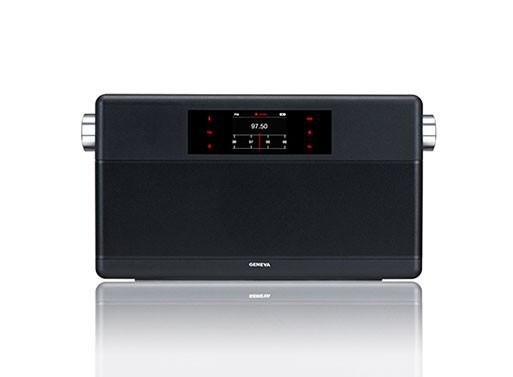 Let me tell you a little story. One of these showed up last week for me to review, and, as I’m not especially excited by radios, it sat in its box for approximately a day until my husband noticed it. Then, being an audiophile, he promptly started opening the box like a kid on Christmas morning, and asked me while doing so if I got to keep it. Nope, I said, I have to return it after I review it.

Next day after work, when it’s fully charged and ready for a test run, he starts messing with the touch controls and setting the time (on the digital color display) and then tuning the radio to various stations (you can stream all available Internet stations too). I’m mildly impressed, mostly because it’s a sleek little box with old-school boom box influences, and I like that sort of thing. The handle folds down nicely, the touch controls are perfect; all in all, it looks good.

That night, we set it in the living room to compare it with the speakers set up with the TV, which we sometimes use for an overall sound system during dinners and such. That’s where we both got hooked- the sound is actually pretty damn good. It fills a room easily with a warm, not-at-all-tinny sound, and the bass certainly feels as if it’s not encased in a small box. We could use this outside on the patio! We could take this on a picnic! I could use this in my office! he said. Etc., etc. And, of course, it has a built-in wireless Bluetooth receiver, so we listened to a bunch of favorite songs on an iPhone, easy as can be.

Now, if I was an audiophile, I would rattle off some more specs, maybe insert ‘awesome’ somewhere as an adjective, but I think it’s more telling to repeat what my husband said: ‘You have to figure out how to keep this thing, by hook or by crook. Can you just not return it?’ To which I replied that I would ask nicely, at least for some kind of discount. So, dear Geneva rep/PR person that sent me this WorldRadio, can I keep it? Or at least get some kind of discount? My husband wants to put it in his office. More specs and info below.