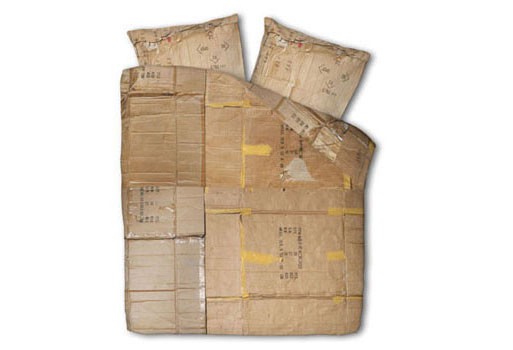 Check it out- this duvet is printed to look like cardboard boxes, which might provoke mixed feelings but the intention seems entirely good.

The Home Duvet lets you sleep under a cardboard box so a homeless person doesn’t have to!
This high quality duvet cover features a photographic print of a cardboard box. This produces an extremely sharp image that stays flexible because the ink is printed directly in the cotton. The image will stay crisp after frequent washing.
The cotton has a thread count of 144 threads per square inch, so it’s soft to the touch virtually non-iron. The duvet cover is produced in Pakistan and child labour is not used.
30% of the gross profits go to Centrepoint, the UK charity for homeless young people aged 16-25 (charity number 292411). Every night Centrepoint provides support and housing for 800 vulnerable homeless young people