Iraq: The Space Between 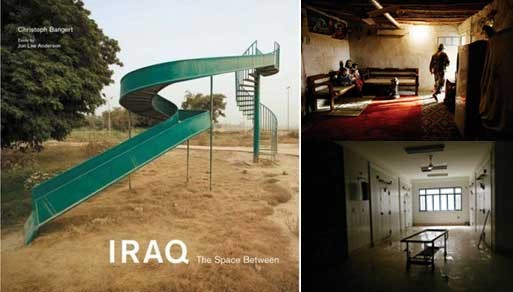 Photographs of the wounded in hospitals, empty playgrounds, and men crying over their dead children do little to assuage the overall feel of emptiness that is brought home with this book of photographs in Iraq. There’s beauty to be found in the images of dusty landscapes, but the lonely streets, some scattered with trash, push the previous sense of beauty clear out of the way. The American soldiers outfitted in their layers of gear contrast roughly with the people living in such a war zone, especially since most Iraqis shown are captured, wounded, grieving or dead. There’s an honesty that’s painful to look at, a reality of immediate grief that we don’t always see on the evening news channels, which, let’s face it, by now if we watch at all we’re mostly immune to that sort of stuff anyways. I’d like to think these images stir up some feelings that disregard personal political affiliations, and bring about some clear ideas of how horrible war is despite the reasons for it, and maybe even create some sense of compassion and understanding for those that go through it, but I’m sure there’s someone somewhere who can prove me wrong.

â€œFor me, this book is about distance. It describes the gap between different peoples and cultures in Iraq. It attempts to show the space between two wars, the American invasion and the Iraqi civil war, the space between us and them, my experience and your experience. The fear and mistrust between humans.â€ -Christoph Bangert