READ > Books > Art/Photography Books > At a Crossroads: Between a Rock and My Parents’ Place

At a Crossroads: Between a Rock and My Parents’ Place 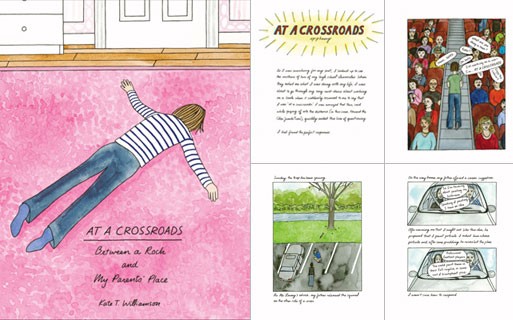 With thoughtful watercolor drawings, Kate T. Williamson captures the many moments of her daily life after moving back in with her parents for what was thought to be a three-month stopover but soon became a twenty-three-month stay.

Small details and ordinary scenes amount to a personal memoir that catches all the joys and embarrassing episodes of living once again with one’s own parents. From spending her twenty-fourth birthday at a Hall&Oates concert with her mother to hiding in the fridge at a floral shop to avoid the ‘what are you doing with your life’ question, there’s a sense of self awareness captured in her own script that is alternately uncomfortable and funny. This would be a perfect gift for anyone who has ever moved back in with their parents (or might be tempted to) and for those who have experienced the strange period of ‘in-between-ness’ that occurs after college but right before finding one’s own roots.

Price: $19.95
Availability: Buy At a Crossroads: Between a Rock and My Parents’ Place here