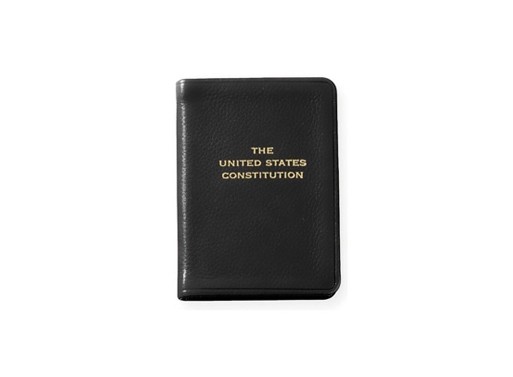 Can you name one right or freedom guaranteed by the first amendment? What about the second? Do you know what part of the government has the power to declare war? Answers below. Take the Full Civic Literacy Exam and find out how you score compared to the average citizen (and most local elected officials). If you fail, or even if you pass, think about adding this palm-sized version of the US Constitution to your mobile library. It includes the complete Constitution, the Bill of Rights, and every constitutional amendment to the present day.

Q: Can you name one right or freedom guaranteed by the first amendment?
A: There are five, take your pick:
Freedom of religion
Freedom of speech
Freedom of the press
Freedom of assembly
Right to address the government for redress of grievances

“Congress may make no law respecting an establishment of religion or prohibiting the free exercise thereof; or abridging the freedom of speech, or of the press; or the right of the people peaceably to assemble, and to petition the government redress of grievances.”

Q: Can you name one right or freedom guaranteed by the second amendment?
A: To keep and bear arms

“A well regulated Militia, being necessary to the security of a free State, the right of the people to keep and bear Arms, shall not be infringed.”

Read more: Wikipedia has quick read of the List of amendments to the United States Constitution, or you can view the full transcript at archives.gov

Q: Do you know what part of the government has the power to declare war?
A: Congress

U.S. Constitution, Article I , Section 8: “The Congress shall have Power … To declare War, grant Letters of Marque and Reprisal, and make Rules concerning Captures on Land and Water; To raise and support Armies, but no Appropriation of Money to that Use shall be for a longer Term than two Years; To provide and maintain a Navy; To make Rules for the Government and Regulation of the land and naval Forces; To provide for calling forth the Militia to execute the Laws of the Union, suppress Insurrections and repel Invasions; To provide for organizing, arming, and disciplining, the Militia, and for governing such Part of them as may be employed in the Service of the United States, reserving to the States respectively, the Appointment of the Officers, and the Authority of training the Militia according to the discipline prescribed by Congress …”.

more at wiki.answers and archives.gov.